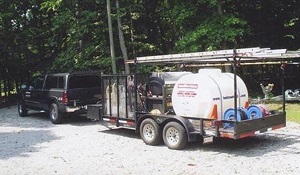 In the southeastern United States, with the warm temperatures and high humidity, there is a growing problem with algae on roofs and particularly asphalt/fiberglass shingled roofs.

This algae known as Gloeocaps Magma which is identified by the brownish black streaks seen on the shingle usually appears on the north side of the house first. This is where there is the least sun and the most moisture. With a warm moist surface, the only thing the algae needs is a food source to grow and spread. The food source is limestone.

Now the question becomes, is the algae a problem or just an eyesore?
Not only an eyesore, but Gloeocapsa Magma in some extreme cases left untreated can become a health issue to some with chronic breathing and allergy problems. But in general, the algae will just continue to grow until the entire roof is covered. With the roof granular covered with algae, it inhibits the ability to reflect the UV rays of the sun. This in turn causes excessive heat build up in the attic which not only causes higher cooling costs, but also increases the deterioration of the shingles.

In its early stages, Goleocapsa Magma is more of an eyesore, but as it grows, it can become a significant problem. The best advice is to have it removed by a professional roof cleaning contractor when it becomes unsightly.

Taskmasters uses a No Pressure technique approved by A.R.M.A. (American Roofing Manufactures Association) to remove the algae safely without damaging the roof. Give us a call with any questions, we love to help.

If you're looking for a professional roof cleaning contractor in Augusta, then give us a call 252-266-9457 or complete our online request form.

Thanks again! The logs have never looked that good before and the deck is unbelievable to say the least.
- Kitty & Doug
Read More

Thank you for a great job on our house and piers. I would highly recommend Taskmasters to anyone interested in a first-class job!
- A.B. Erickson
Read More